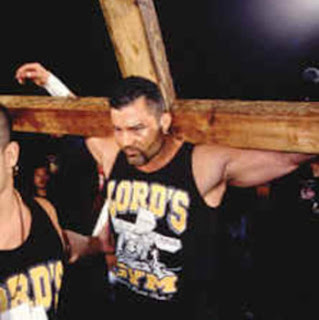 Royce Gracie entered UFC 3 with the chance to continue his legacy as the Michael Jordan of the fledgling sport of mixed martial arts.

While the eight-man tournament was set up like the first two UFC events, as a battle to see which style of martial arts was superior, everyone knew that one athlete – Royce Gracie – had to be knocked off to keep everyone else from being irrelevant.

Big John McCarthy was the referee for all of the fights, and for the first time, he had the discretion to stop the fight, rather than waiting for the cornerman to throw in the towel.

Bryan Kilmeade, Jim Brown and Ben Perry returned as the announce crew, and they worked together very smoothly. Rich “G-Man” Goins continued his streak as ring announcer for all three UFC shows.

Hackney was facing a man more than three times his weight (200 pounds to 616). There’s something you don’t see these days.

Yarborough showed off his power early by throwing Hackney through the door and out of the cage. However, the big man looked like he was chewing gum, and he ran out of gas quickly.

Hackney dropped him with a punch and added more punches on the ground to win by TKO. Yarborough and the other first-round losers walked away with $1,000. The first-round winners were guaranteed at least $5,000.

So between Yarborough and Telia Tuli (UFC 1), it’s looking like we can eliminate “sumo wrestling” from contention as the best fighting style on the planet.

Ken Shamrock lost to Gracie in the semifinals of UFC 1, and he would have been back at UFC 2 if it weren’t for a wrist injury. Leninger was a 10-time Arizona judo champ and the No. 2 ranked judoka in the U.S. in his weight class.

Shamrock opened with a takedown and Leninger pulled guard. Shamrock took the back, transitioned to the top and delivered some strong punches. Tired of being used as a punching bag and sensing there was no way out, Leninger tapped at the five-minute mark.

Payne got a huge ovation from his hometown fans in Charlotte. Howard and his crew represented Canada. Kilmeade pointed out that the Canadians came out in the “Gracie train” formation. Jim Brown said the train originated with boxers like Joe Frazier and Muhammad Ali.

Howard dropped Payne on his head, but Payne gamely popped up and started throwing some kicks. Howard won the brawl with a devastating right, and Payne was out on the way to the canvas.

Kimo made it clear that he was here to fight and spread the gospel of Jesus Christ. Not only did have Jesus’ Name tattooed on his abdomen, but he had a giant tattoo of the crucified Christ on his back.

Kimo came out with a giant cross on his back and wrapped up his entrance by Tebowing! So all this time, we should have called it Kimoing.

Gracie came out to a massive cheer, as the crowd knew him and gave him total respect for dominating the first two UFC tournaments.

Gracie couldn’t take Kimo down for the first 90 seconds. Finally, both men went down and Kimo took Gracie’s back. Royce fought his way to the top, but Kimo BUCKED him off and landed on top. Okay, now we’ve got a fight.

Kimo passed his guard and smothered Gracie, which is what Royce always loved to do. Gracie responded by using Kimo’s hair as a handle (There are no rules!).

Royce finally won the fight by grabbing an armbar from the bottom. All this action happened in less than five minutes, so this is your first “greatest fight in UFC history.”

Mitchell came to the ring wearing boxing gloves, but he decided to take them off before the fight. “Good idea,” said Art Jimmerson, watching at home.

Lots of close-quarters fighting wore out both men and the crowd. Finally, Shamrock put Mitchell away at the 4:30 mark with the rear naked choke.

Shamrock guaranteed himself at least $15,000 with his semifinal victory.

The announcers talk about how banged up Gracie is from the first fight. Sure enough, the towel came flying in and Gracie left the tournament with a shoulder injury. Just like that, Gracie’s streak was over.

This kicked off a hilarious double celebration in the Octagon. First, Howard and Team Canada started jumping around like they really won the fight. Then, Kimo and his entourage hit the ring for a victory lap as if to say “Yeah, that was us!”

The finals were a big problem, as Shamrock was also unable to compete due to an injury. Steve Jennum, an alternate, jumped right into the final fight.

Howard tried a big flip that completely missed before landing a hard right hand. Jennum rebounded by working Howard into the mount position. He ground-and-pounded his way to victory, winning the whole tournament.

Jennum, the pride of Omaha, Neb., was busted open from that first big punch, but he was the winner. Promoter Art Davie wrote “Steve Jennum!” on the check, and that’s a wrap!

@JeffDGorman is an MMA announcer. You can e-mail him at jeff@mmaspecialist.com and check out his work here.
at July 08, 2012