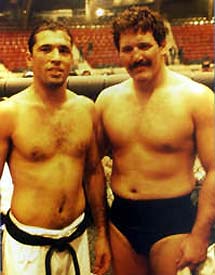 Royce Grace’s quest to reclaim the undisputed top spot in mixed martial arts was the theme of UFC’s fourth show.

After winning the first two tournaments, Gracie suffered an injury in his first-round win over Kimo at UFC 3. This allowed alternate Steve Jennum to surprise everyone and win the tournament.

Bruce Beck and Jim Brown return on commentary, joined by Jeff Blatnick, who won a gold medal for the U.S. in Greco-Roman wrestling in 1984.

The announcers helpfully explain that the UFC has solved the problem from the last show by having alternates win a prelim fight so they won’t be totally fresh like Jennum if they are pressed into service.