UFC 7: Who is the King of the Streets? 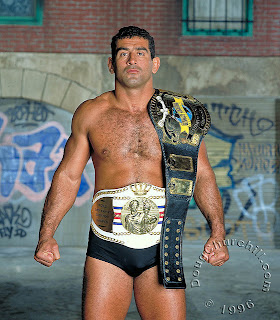 The Rock vs. The Russian Bear is touted as the main event, but it’s not Dwayne Johnson vs. Ivan Koloff. Instead, it’s Ken Shamrock vs. Oleg Taktarov in the superfight main event.

Shamrock is coming off a win over Dan Severn in the UFC 6 superfight, while Taktarov won the UFC 6 tournament. That seems to be the new plan: make a new star in the tournament and then put him up against the superfight winner on the next show.

We’re at the Aud, aka the Buffalo Memorial Auditorium, home of the Buffalo Sabres hockey team, and this show is taking place just seven weeks after UFC 6.

Bruce Beck is on play-by-play, with Jeff Blatnick on color. Sadly, Jim Brown, our last announcing holdover from UFC 1, is gone, so legendary kickboxer Don “The Dragon” takes his place. He worked on the "Batman Forever" movie.  Michael Buffer is the ring announcer.


Before we get started, we get highlights of the alternate fights. Joel Sutton beat Geza Kalman by TKO in 48 seconds; Onassis Parungao defeated Francesco Maturi by tapout to strikes in 5:26; and Scott Bessac made David Hood tap out to a guillotine choke in 31 seconds.

John McCarthy is referee for all of our fights for the third show in a row. Here we go!

Harris, a 260-pounder from , , is a former security guard for the Milwaukee Brewers. Varelans hails from and is 300 pounds. He appeared at UFC 6, beating Cal Worsham before losing to Tank Abbott. Both men are 6-foot-8.

notes that in K-K karate, they don’t punch in the face. Harris might want to go a little off-book at this point. Varelans takes Harris down and gets his back, he but punches Harris over and over when the rear naked choke is right there for the taking. He finds that elbows to the back of the head work just fine, too, and Harris taps out at 1:07.

Hall is a 190-pounder making his UFC debut and hails from , Howard, the 240-pound runner-up from UFC 3, gets a giant cheer when he is announced from nearby .

Howard bullies Hall around and takes him down, but Hall winds up on top and busts Howard’s nose with a punch. Hall actually grabbs Howard by the mullet to keep his head in place for more punches. Howard has had enough and taps out at 1:41.

Pardoel weighs 265 pounds. He’s 2-1 in the Octagon and is a former Dutch, German, Danish, Belgian and World jiu-jitsu champ. Parker is a 235-pound full-time student at in . Both men are wearing the gi.

Pardoel gets going with a judo trip, headlock and armlock, and then he starts walloping Parker in the head. Parker seems to have no way out. He somehow survives, but Pardoel is just smothering him while trying to think of a submission idea. The action is really slowing down and the fans don’t like it. Finally, Pardoel sinks in the choke for the tap out at 3:05.

Ruas has such a cool nickname that I’m amazed no current fighter has stolen it. He’s a 210-pound, four-time Brazilian Vale Tudo champion. Cureton is a 248-pound super-heavyweight kickboxing champion from . He appeared at UFC 5 and lost to Todd Medina.

Cureton tries for a guillotine choke, but Ruas slams him and is in control. Cureton reverses to the top, so Ruas pulls guard. After a while, Cureton stands up, but Ruas is working on a leglock and BLASTS Cureton with an upkick; he’s the King of Multi-Tasking!

Ruas turns over into a heel hook for the tap-out at 3:23. So all four quarterfinal fights ended in tap-outs.

Hall starts the fight by landing a nice right, but Varelans takes control with a headlock takeover. Varelans lands an elbow to the head and finishes with a keylock at 1:04. The Polar Bear is in the finals!

After an exchange of leg kicks, Pardoel controls Ruas against the fence.  This turns into a long stalemate in which Pardoel wants a guillotine but Ruas is blocking it with his hand. After five minutes, they crash to the canvas and Ruas scrambles to the top.

Ruas tries for an anklelock for a long time, but Pardoel finally escapes. Ruas gets side control and drops some knees. Pardoel suddenly taps at 12:27 and nobody knows why. The announcers speculate that he was about to take a lot of punishment and thought better of it.  That makes sense.

Tank Abbott talks to Blatnick, saying the only reason Abbott didn’t win UFC 6 was that he was unprepared for the altitude. Looks like someone needs a topographical map for his next birthday present. Abbott said he will be at the upcoming "Ultimate Ultimate" show.

Bare-knuckle brawl for these former sparring partners to start, but the action goes to the mat with Shamrock on top. Oleg delivers rabbit punches to the back of the head, while Shamrock counters with headbutts. This goes on for five minutes. Shamrock gets some separation and tags Oleg with a couple of rights.

Oleg starts whacking Shamrock repeatedly in the back of the head, but Shamrock has been on top of him the entire fight at the 11-minute mark. Shamrock notices that Oleg is bleeding from the left eye and starts going after it with headbutts.

Nothing happens on the feet, and after a minute, Shamrock gets another takedown. Fans are really getting tired of this as we near 25 minutes. Stand up once more at 27:30.  Taktarov lands a couple of punches and Shamrock is bleeding from the nose. Time expires and we go to a three-minute overtime.

In the extra session, Shamrock hits a home-run uppercut, but Taktarov’s head is a block of cement and he won’t go down. Taktarov pulls guard for the final minute, rides out the clock and it’s a 33-minute draw in the superfight.

Winner goes to the “Ultimate Ultimate” supershow on Dec. 16, 1995, with other UFC stars and champions.

Ruas throws some leg kicks, but the Polar Bear squashes him up against the cage. More stand-up, but Ruas walks right into a guillotine choke. It looks good, but Ruas escapes.

Ruas has Varelans in a bodylock from behind. Foot stomp battle, and Ruas is winning it. After a long time in this position, McCarthy restarts it. Ruas has really worn Varelans down with kicks to the left leg.

Ruas finally chops Varelans down and dives on top for a barrage of punches. McCarthy stops the fight at 13:17, and the “King of the Streets” Marco Ruas is the King of UFC 7.
at April 20, 2013