UFC 9: A Fight About Nothing 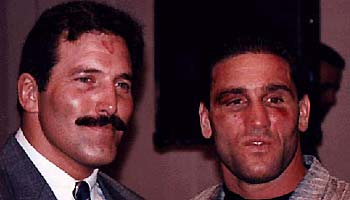 UFC 9 featured a grudge match between UFC Superfight Champion Ken Shamrock and Dan Severn, who got a huge ovation from his hometown fans at the Cobo Arena.

told Jeff Blatnick “nothing really clicked” in his first fight with Shamrock at UFC 6. He said he would be more patient and look for an opening. Trust me: he really meant this from the bottom of his heart.

Don “The Dragon” spoke with Shamrock, who said the fight would be a good chess match. Well, most of the fight looked like a chess match played by toddlers who don’t know how the pieces work.

Don’t skip ahead to the main event, now! We have five other bouts on tap first. The UFC scrapped the tournament format for the first time, although it came right back for UFC 10.

Before the PPV, Steve Neimark beat Tai Bowden when the doctor stopped the fight at 7:25.

Bruce Beck is calling the action with Wilson and Blatnick. Rich Goins is our ring announcer (he does a great job) and here we go!

This is the second UFC bout for both fighters. Frazier, who has a seven-inch height advantage, lost to Kevin Rozier at UFC 1, while Worsham lost at UFC 6 to Paul Varelans.

After a minute of inactivity, Worsham gets a takedown and tries some headbutts. He stays in control with left-hand punches and elbows.  Worsham continues the domination and Frazier taps out at 3:17.

Both men are debuting in the Octagon. Carino, a native of Rio de Janiero, is 6’8”. He has six inches and 20 pounds on Andersen, who is from

Blatnick openly doubts that Carino is as big as advertised: “I’m a heavyweight. He doesn’t look that big,” Blatnick says.

Carino grabs a waistlock takedown and pulls guard. Carino slips in a good punch or two, but Andersen avoids any major damage. The fans don’t like this ground-based battle.

Carino finally breaks through with big shots from the mount, and Andersen is bleeding above his right eye. Referee John McCarthy stops the carnage, and it’s a TKO win for Carino at 5:33.

David Beneteau was supposed to fight UFC 8 runner-up Goodridge in a battle of Canadian heavyweights, but he broke his hand while sparring with Schultz, a former Olympic gold medal freestyle wrestler from .

So who takes his place? Schultz. Beneteau is in his corner, so no hard feelings.

The announcers finally correct the story from UFC 8 about Goodridge beating 1,000 Japanese men in arm wrestling in two hours. He did it in 1 hour, 47 minutes. Glad we cleared that up.

Schultz gets the takedown to kick things off. However, Goodridge has Schultz's head trapped. Schultz gets free and stays on top, softening up Goodridge with shots to the body, plus a left to face that draws blood.


Schultz finally passes guard, but nothing happens, so McCarthy stands them up. Immediately, they go right back to the mat with Schultz on top again.

Goodridge is getting almost no offense. The ref stops the fight momentarily so the doctor
can check on Goodridge’s cut. It’s on the side of his eye, so he can keep going.

We start again, and Goodridge just can’t land any meaningful strikes. Schultz hits a left to the damaged eye area, and he gets yet another takedown. Schultz opens up with ground and pound, but the 12-minute time limit expires and Goodridge is somehow still in the fight.

Wait! There’s no overtime because McCarthy stops the fight and declares Schultz the winner. Schultz didn’t know he would be fighting when he woke up that day, but he still delivered a dominant performance..

Hall, who is 2-1 in UFC competition, weighs 189 pounds, Kitao checks in at 390.  Kitao was the sumo grand champion (yokozuna) in 1996 and was also a successful pro wrestler. Beck says Kitao is the first yokozuna to leave the sumo world to pursue other fighting interests.

Kitao bulls Hall up against the cage and takes him down. However, McCarthy jumps in to stop the action because Kitao is bleeding like crazy.  The fight is over in 47 seconds. How did that happen?

The replay shows that Hall practically blasted Kitao’s nose off his face with a crushing right hand just before Kitao obscured him with his girth.

This was supposed to be Marco Ruas vs. Frye in a battle of the last two UFC tournament winners. Alas, Ruas got hurt, so Bitetti, another Brazilian fighter, took his place.

Bitetti battles relentlessly to take down Frye, who lands a couple of nice punches. Bitetti won't stop trying for the takedown.

Frye gets a “” chant from the crowd and drills Bitetti with heavy punches and knees. Down on the mat, Frye brutalizes Bitetti with elbows, and the young Brazilian is showing some major-league manhood by staying in this fight.

Here we go again. Frye sprawls out of a takedown and continues bludgeoning Bitetti with knees and elbows. Bitetti is just too tough for his own good, so McCarthy has to stop the fight at 9:30.

Shamrock won their first battle with a guillotine choke at the 2:15 mark at UFC 6.  This match has a 25-minute time limit; the previous fights tonight had 15-minute limits. circles Shamrock for several minutes, pawing out a jab occasionally.

The fans love but they are getting restless because nothing has happened in the first eight minutes of the fight. Now the fans are booing in full force. Shamrock starts bleeding from the left cheek, which is surprising because has mostly been dancing around him for nine minutes.

McCarthy has has enough of this after more than 11 minutes of non-action. This fight reminds me of a high school girls’ basketball game I announced. One team played stall-ball for the entire second half. Kudos to the UFC announcers for trying their best; there is just nothing happening.

Shamrock finally lands a few punches after 13 minutes of nothing. Here come the “BORING” chants. finally does something after 17 minutes by diving for Shamrock’s leg. Compared to what came before, it was like Fourth of July fireworks.

Shamrock escapes and tries a guillotine choke. slips out and they are back to their feet. Severn tries for the leg again, but Shamrock gets away, comes out on top and delivers punches to ’s ribs.

finally gets a reversal, but he only has 90 seconds left in regulation to do something. And he just beats the stuffing out of Shamrock with vicious punches and elbows. Shamrock somehow escapes and walks away with 15 seconds left. We’re going to a three-minute overtime.

How about the second overtime? More nothing until a grappling flurry in the last 20 seconds. Let’s see what the judges say.

So after doing nothing but walk in a circle for most of the fight, Dan Severn used 75 seconds of brutality to beat Ken Shamrock and become the new UFC Superfight champion.

One of ’s cornermen holds up a sign challenging Royce Gracie for UFC 10.

You can’t argue with Severn's strategy, because it worked.

Check out Bloody Elbow's great story explaining the strange circumstances around this fight.
at July 22, 2013