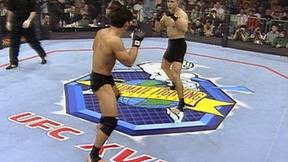 Both fighters start quickly. Burnett lands some good combinations. He sinks in a guillotine choke, but Tadeu escapes.   Referee Joe Hamilton stands the fighters up after a stalemate on the ground.

This helps Burnett, who lands more good shots including a pair of uppercuts. Tadeu doesn’t go down, but Hamilton stops the fight at 9:44.

Burnett isn’t able to continue in the tournament due to a broken finger, so alternate Chris Brennan will move on the finals.

Miletich is from Davenport, Iowa, and has already racked up 18 wins in 20 no-holds-barred fights. Saunders, from Phoenix, Ariz., won a silver medal in the 1996 Summer Olympics in freestyle wrestling.

The crowd boos the fighters after a tentative start. Both men trade submission attempts: an armbar by Miletich and a heel hook by Saunders.  Miletich goes for a keylock and time expires. Blatnick uses a Telestrator during the break before overtime.

In extra time, Miletich lands some knee strikes. Sanders comes back with a late flurry, but time expires again. The judges render a split decision in favor of Miletich.

Bohlander won the tournament at UFC 12. The announcers call him the “new leader of the Lion’s Den” with Ken Shamrock off to the WWF.  Jackson won Olympic gold in 1992 and also won the UFC 14 middleweight tournament.

Jackson escapes an armbar and later takes Bohlander down with a headlock. Bohlander grabs an armbar from the bottom and referee John McCarthy stops the fight at 10:49, even though Jackson didn’t tap out.

Jackson would never again compete in the UFC.

Brennan comes out in the middle of a Gracie train with only three guys in it. These two have fought twice before, including a 30-minute draw.

This fight doesn’t last nearly that long. Brennan grabs a kick and takes Miletich down. He tries a guillotine, but Miletich escapes. He wears Brennan down from the top and chokes him out at 9:01 to win the tournament.

At UFC 17, Vitor Belfort and Tank Abbott will return to action, plus Randy Couture will defend the UFC heavyweight title against Mark Coleman.

Speaking of Abbott, he is on guest commentary. Kohsaka is training with Maurice Smith, who says Kohsaka is learning to strike. Kimo relies on striking and power. His only UFC losses were to Royce Gracie and Ken Shamrock.

Kimo lands some strong lefts and tries for a leglock. Kohsaka escapes but is taken down by Kimo. Blatnick keeps accidentally calling Kohsaka “Sakuraba.”

Kimo lands some big shots and later escapes a leglock. Kohsaka softens Kimo up with some kicks and has the punching advantage, but time runs out.

In overtime, Kimo finally gets a takedown on the third try. Kohsaka reverses and lands some punches from the top. Time expires again, and the judges give the unanimous decision to Kohsaka.

Zinoviev is the undefeated middleweight champion of Extreme Fighting and hails from St. Petersburg, Russia.

Shamrock slams Zinoviev and he’s out cold in 22 seconds. It’s over!

Zinoviev's career is also over after suffering a collarbone injury.

Shamrock tells Joe Rogan he’ll fight anyone, even in the heavyweight division. Blatnick notes that none of Shamrock’s fights have gone past the 25-second mark.