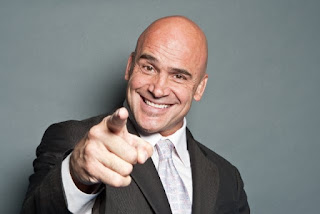 Announcers  Mike Goldberg and Jeff Blatnick welcome the fans and thank those who have been lobbying to get UFC back on most pay-per-view carriers.

They also talk about the semifinal matches in the Road to the Heavyweight Title, which had been vacated by Randy Couture due to a contract dispute.

Before the pay-per-view went on the air, LaVerne Clark beat Frank Caracci via tapout to strikes at the 6:52 mark.

Dave Meltzer of Wrestling Observer fame is one of the judges. Bruce Buffer is the ring announcer and John McCarthy and Tony Mullenix are the referees. Here we go!

Both are debuting in the Octagon. Tanner, from Amarillo, Texas, is 16-1 in Pancrase and Extreme Challenge. Gholar is a two-time national Greco-Roman champion.  He is also a Hollywood screenwriter.

Gholar catches a kick from Tanner and sweeps the other leg, dumping him to the mat. Gholar picks Tanner up and slams him, but Tanner is doggedly trying for a triangle choke. Gholar escapes and cuts Tanner open with punches on the ground.

Tanner gets back up and unleashes kicks and knees to Gholar, who suddenly looks tired. Tanner sinks in a rear naked choke and gets the tap out at 7:57.

Burnett is from Tulsa, Okla. He challenged Pat Miletich for the lightweight title at Ultimate Brazil but lost by split decision.  Ken Shamrock, wrestling for the WWF at this time, is in his corner. Saunders, from Phoenix, is an Olympic silver medalist and lost a split decision to Miletich at UFC 16.

Burnett floors Saunders with a punch at the two-minute mark. Saunders tries to clear the cobwebs but Burnett blasts him again. Saunders weathers the storm but can't get close enough to Burnett to use his wrestling. The 12-minute time limit expires.

In overtime, Saunders tries a takedown but Burnett deftly avoids it. After a stalemate against the cage, time runs out again. The winner by unanimous decision: Mikey Burnett.

We see a video on the rise and fall of Mark Coleman, who will try to silence the naysayers tonight. His opponent, Pedro Rizzo, became a hero in Brazil by beating Tank Abbott.

Coleman plans to win with his signature ground and pound. Rizzo is 24 years old, a decade younger than Coleman, who gets an early takedown.

Matchmaker John Perretti is on commentary, and he says that running out of gas is on Coleman's mind since it happened in his last two  fights.

Coleman is on top for five minutes, landing shots here and there, before ref John McCarthy stands the fighters up. Coleman lands more good punches, opening a cut around Rizzo's left eye.

Coleman scores another takedown, but Rizzo defends himself well against ground-and-pound damage. McCarthy stands them up again, and the 12-minute regulation time expires.

Overtime has not been nice to Coleman, Goldberg says. Everyone says Rizzo is about to throw the big head kick, but it never happens. Winner by split decision: Pedro Rizzo. Huh?

Rizzo was on the defensive for the entire fight, and his offense never put Coleman in danger. I disagree. So that's three losses in a row for Coleman.

Macaco (which means "Monkey" in Portuguese) comes out with a Gracie train and is wearing a "100% Jesus" T-shirt.  He is getting a title shot despite losing three of his last four fights.

Miletich won the title in a tournament at UFC 16, here in the Pontchartrain Center. He wins the bout on a unanimous decision to retain his title.

The first stop on the road was UFC Ultimate Brazil, where Kohsaka beat Pete Williams to advance to this bout. Rutten was making his Octagon debut after a successful run in Japan's Pancrase promotion. He hasn't lost a fight in three years.

The fight went into overtime, where nothing much usually happens. Not this time.  Rutten used a devastating knee strike to set up a flurry of punches to earn him a TKO win.

Suddenly, Rutten became a serious threat to become the next UFC heavyweight champion.
at January 01, 2016