UFC 21: Sons of the Hawkeye State 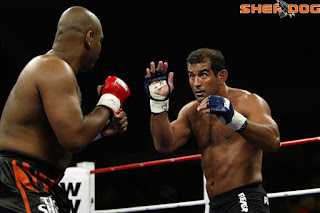 Maurice Smith overcame “The King of the Streets” Marco Ruas in the main event of UFC 21.

Smith, a former UFC heavyweight champion, battled Ruas for five minutes before Ruas had to retire due to a knee injury.

Despite the lackluster finish, UFC 21 was a significant show because it saw the debut of the 10-point must system in the scoring.

The Iowa fans cheered favorite son Pat Miletich to a successful defense of his UFC lightweight title. Miletich stopped Andre Pederneiras in the second-round by TKO due to excessive cuts.

The championship bout was scheduled for five rounds, another UFC first.

Hometown boy Jeremy Horn built on his win over Chuck Liddell at UFC 19 by beating Daiju Takase at 4:41. Horn won more than 90 fights in his career.

Paul Jones made a successful UFC debut, forcing Flavio Luiz Moura to tap out to a rear naked choke at 4:20. Jones improved his record to 10-0-1, setting himself up for a fight with Liddell on the next show.

Tsuyoshi Kohsaka scored his first UFC win over Tim Lajcik, who was unable to continue after Round 2.

Eugene ”The Wolf” Jackson debuted in the Octagon with a second-round knockout win over Royce Alger, improving his record to 10-3-1.

Before the PPV went on the air, Travis “Iron Man” Fulton scored one of his 253 career win by defeating David Dodd by unanimous decision.