UFC 23: Return to the Rising Sun 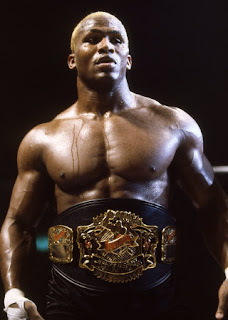 Kevin Randleman made the most of his second chance to become UFC heavyweight champion at UFC 23: Ultimate Japan 2.

Although Randleman lost to Bas Rutten in a title fight at UFC 20, Rutten vacated the title in order to drop to middleweight and challenge for Frank Shamrock’s title. That never happened, as Rutten was forced into retirement by injuries.

Randleman battled for five rounds with Pete “El Duro” Williams, who had posted a 3-1 record in UFC. Williams clobbered Randleman late in the first round, but "The Monster" rallied to control the rest of the fight and win by unanimous decision.

"That punch he hit me with stunned me, and I was very surprised," Randleman said, "but I came back and did what I had to do.
Tsuyoshi Kosaka, who was also 3-1 in UFC, led a strong contingent of Japanese talent on the show. However, he lost the co-main event to Pedro Rizzo on a third-round TKO.

UFC crowned its first “UFC Japan” champion in its doomed attempt to compete with K-1 and PRIDE in the Japanese market.

Kenichi Yamamoto won the final match of the four-man tournament over Katsuhisa Fujii with a kneebar in 4:15. As UFC wrapped up the millennium, this was the last tournament in its history.

Other results included Joe Slick (great name!) winning his UFC debut over Jason DeLucia via knee injury stoppage at 1:12; and Eugene Jackson over Kelichiro Yamamiya on a Round 3 knockout.
at May 01, 2017