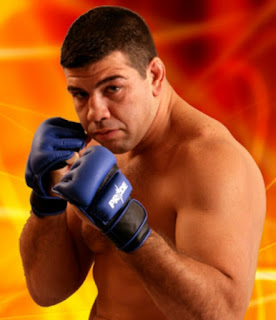 The show was subtitled “First Defense” but it turned into “No Defense” due to Randleman’s slip, which landed him in the hospital with a concussion.

The non-main event typified the UFC as the new millennium began: nothing was going right. UFC was still exiled from many PPV carriers, and the company’s invasion of Japan wasn’t bearing much fruit.

The Randleman-Rizzo title fight was rescheduled for UFC 26.

In the final two bouts of the night, middleweight Lance Gibson knocked out Jermaine Andre with a knee strike in Round 3, and heavyweight Tedd Williams beat Steve Judson by TKO at 3:23.

Jens “Lil’ Evil” Pulver improved to 2-0 in the Octagon with TKO win over David Velasquez in Round 2.

In a battle of lightweights, "Crazy" Bob Cook beat Tiki Ghosn with a rear-naked choke in Round 2.

Shonie Carter made his UFC debut on the pre-show with a unanimous decision win over Brad Gumm.

In another prelim bout, Scott "The King of Leglocks" Adams forced Ian Freeman to submit to an Achilles lock in 3:09.

Dan “The Beast” Severn, a hero of the UFC’s early days, was the referee for the preliminary bouts.