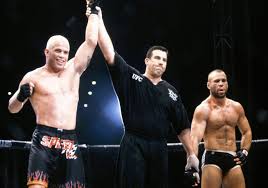 Six months earlier, Ortiz had come up short in his quest to win the title from Frank Shamrock. However, Shamrock’s retirement gave him another chance.

Silva was coming off three straight wins in PRIDE and he would go on to star for that promotion.

Ortiz took control of the first two rounds with punches and dominated the rest of the five-round bout on the mat.

In other bouts, future middleweight champion Murilo Bustamante debuted with a win over “Mr. 200%” Yoji Anjo with an arm triangle choke in Round 2.

Eugene Jackson, who was victorious on last the last Japan show, lost to Sanae Kikuta via armbar submission at 4:38.

Ron “H2O” Waterman picked up his second UFC victory, opening the PPV with a unanimous decision over Satoshi Honma.


Before the show went on the air, future PRIDE star Ikuhisa Minowa beat Joe Slick by TKO in Round 2. Also, LaVerne Clark won a majority decision over Koji Oishi.
at May 03, 2017