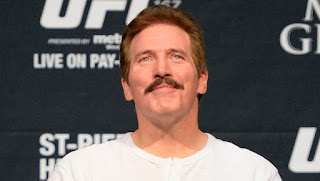 Dan Severn had a rough return to the Octagon at UFC 27, as he lost to Pedro “The Rock” Rizzo in 93 seconds.

Rizzo softened up the 42-year-old former UFC Superfight champion with two crushing leg kicks, and Severn was unable to continue.

Rizzo was reinvigorated by the win, bouncing back from a loss to Kevin Randleman three months earlier at UFC 26.

“The old Pedro Rizzo is back,” he said. “I come to knock everybody out.”


Severn had spent the previous three years away from UFC, fighting for an alphabet soup’s worth of smaller promotions. He even wrestled in the WWF, where he also faced “The Rock” (Dwayne Johnson).

Former UFC heavyweight champ Maurice Smith enjoyed a better outcome in his return to UFC after a year competing for promotions like Pride and Rings. Smith won a majority decision over Bobby Hoffman.

Jeremy Horn beat Eugene Jackson by submission to an armbar at 4:32, while Fabiano Iha also used an armbar to beat LaVerne Clark in 70 seconds to avenge his loss at UFC 20.

Jeff "The Snowman" Monson made his first UFC appearance, beating Tim Lajcik by unanimous decision in a preliminary bout.

In other UFC 27 results, Yuki Kondo beat Alexandre Dantas by TKO in Round 3; Ian Freeman defeated Tedd Williams by unanimous decision; and CJ Fernandes battled to a draw with Brad Gumm.
at May 15, 2017