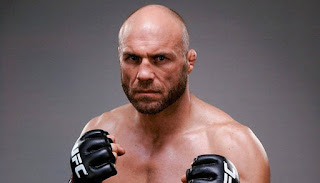 Couture had relinquished the title in 1998 during a contract dispute, but he used knees and punches to score a TKO late in Round 3 to repeat as champion.

Renato “Babalu” Sobral brought a 16-2 record into the UFC, and he immediately made a splash by defeating former UFC heavyweight champion Maurice Smith by unanimous decision.


Future heavyweight champion Andrei Arlovski made a successful UFC debut by forcing Aaron Brink to tap out to an armbar in 55 seconds.

Josh Barnett, who also went on to win the UFC heavyweight title, won a super heavyweight bout over Gan McGee by TKO in Round 2.

Jens Pulver scored a lightning-quick knockout to open the PPV. He put away John Lewis in 15 seconds.

Chris “Lights Out” Lytle competed in the first of his 20 UFC fights. He lost a preliminary bout by unanimous decision to Ben Earwood.

Mark Hughes, Matt’s twin brother, also made his Octagon debut with a unanimous decision win over Alex Steibling.
at May 15, 2017