UFC 29: Out With The Old Owners 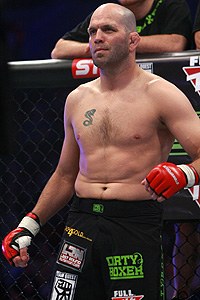 Tito Ortiz and Pat Miletich successfully defended their titles in Japan at UFC 29, the final show under the ownership of Semaphore Entertainment Group.

Ortiz retained the light heavyweight belt by defeating Yuki Kondo with a neck crank at the 1:52 mark. Kondo was no slouch, as he racked up 59 wins in his career.

Pat Miletich continued to dominate as lightweight champion. He beat Kenichi Yamamoto with a guillotine choke in Round 2 for his fourth title defense.

Other TKO finishes included Fabiano Iha over Daiju Takase at 2:25; and the debuting Evan Tanner over Lance Gibson at 4:58.

In a preliminary bout, future welterweight champion Matt Hughes lost to Dennis Hallman via submission to an armbar in 20 seconds. Two years earlier, Hallman had defeated Hughes in 17 seconds.


One month after the show, the Fertitta brothers (Zuffa LLC) bought the UFC from Semaphore.
at May 17, 2017