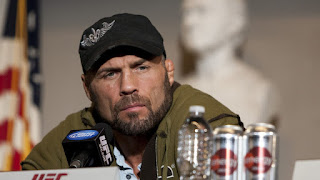 Randy Couture hung onto his UFC heavyweight title with a unanimous decision win over Pedro Rizzo at UFC 31.

Couture bloodied Rizzo in the first round, and the challenger came back to bust Couture open in the second round.  Couture rallied in the fourth and fifth rounds to retain his title.


Shonie Carter electrified the crowd with a spinning backfist knockout over Matt Serra with nine seconds left in the fight.

Chuck Liddell knocked out former heavyweight champion Kevin Randleman at the 1:18 mark. Randleman had dropped down to the light heavyweight division.

Semmy Schilt, a former King of Pancrase, made his UFC debut with a TKO victory in Round 2 over fellow Pancrase alumnus Pete Williams.


Matt Lindland won the pay-per-view opener by disqualification in Round 3. Opponent Ricardo Almeida had been warned by the referee twice about illegal head kicks.

B.J. Penn debuted in a preliminary bout with a TKO win over Joey Gilbert. Penn would go on to win the UFC lightweight and welterweight titles.


In the other prelim fight, Tony DeSouza beat Steve Berger by unanimous decision.
at May 22, 2017