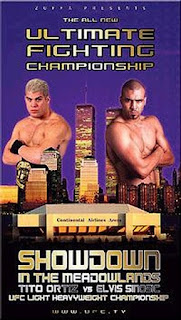 UFC invaded the New York area with UFC 32. The promo poster featured Tito Ortiz and Elvis Sinosic in front of the Twin Towers, which were destroyed less than four months later.

Ortiz remained one of the company’s top stars, as he beat Sinosic to retain the light heavyweight title.

The champ used a series of punches and elbows to earn the TKO over “The King of Rock & Rumble” in 3 minutes, 32 seconds.

“The Prodigy” B.J. Penn improved to 2-0 in the UFC with a TKO win over the debuting Din Thomas.

Caol Uno bounced back from his failed bantamweight title bid to knock out Fabiano Iha in 1:48.

Pat Miletich, who lost his welterweight title to Carlos Newton at UFC 31, bounced back to beat Shonie Carter with a head-kick knockout in Round 2.

In the heavyweight division, Josh Barnett forced Semmy Schilt to submit to an armbar at the 4:21 mark.

Vladimir “The Janitor” Matyushenko made a successful Octagon debut with a unanimous decision win over Yuki Kondo.

Staten Island native Ricco Rodriguez thrilled the crowd by winning his UFC debut over Andrei Arlovski by TKO in Round 3. Both men would go on to win the UFC heavyweight title.