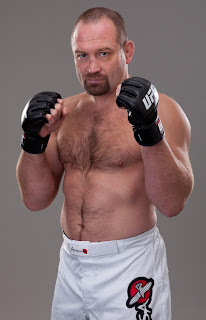 Sometimes a fight card looks great on paper, but it just falls flat. Welcome to UFC 33.

Tito Ortiz was set to defend his light heavyweight title against Vitor Belfort in a stellar matchup. It was UFC's first show in Las Vegas, and pay-per-view carriers were warming up to televising UFC again.

However, due to Belfort’s arm injury, Ortiz battled “The Janitor” Vladimir Matyushenko and beat him via unanimous decision.

In fact, all of the pay-per-view bouts ended in decisions. No knockouts. No submissions. Let’s go to the judges … again.

That caused the show to run long, so the main event was cut off on some pay-per-view carriers.

Ironically, UFC 33 drew 75,000 buys on pay-per-view, as the new Zuffa LLC management started to find some success. The new fans may not have been thrilled by what they saw (or didn’t see).

Jens Pulver retained his lightweight title with a unanimous decision over Dennis Hallman.

In the other pay-per-view bouts, Chuck Liddell beat Murilo Bustamante by unanimous decision; and Matt Serra defeated “The Master of Thug-Jitsu” Yves Edwards by majority decision.


Before the PPV went on the air, Jutaro Nakao knocked out Tony DeSouza; Ricardo Almeida forced Eugene Jackson to submit to a triangle choke; and Din Thomas scored a unanimous decision over Fabiano Iha.
at May 29, 2017