UFC 34: Whose Lights Went Out First? 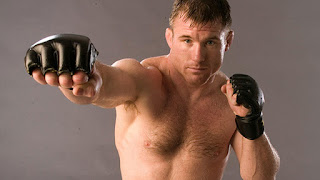 Matt Hughes captured the UFC welterweight title from Carlos Newton in a controversial finish at UFC 34.

Newton had almost knocked out Hughes with a triangle choke, but Hughes slammed the champion to the mat, knocking him out. Hughes had to be told that he was the winner and new champion.

Here’s a video of the finish, and here’s another video with the jubilant new champion seeming to tell his cornerman “I was out! I was out!”

The main event saw Randy Couture retain the UFC heavyweight title at the age of 38. “The Natural” defeated Pedro Rizzo by TKO in Round 3.

These two met at UFC 31 six months earlier, and Couture won by unanimous decision. This fight was even more decisive.

In a battle of heavyweight contenders, Ricco Rodriguez beat Pete Williams by TKO late in Round 2.

B.J. Penn scored a lightning-fast knockout over Caol Uno in just 11 seconds. Watch it for yourself!

Josh Barnett opened the pay-per-view telecast by winning a heavyweight bout over Bobby Hoffman, who tapped out to strikes in Round 2.

Future heavyweight champion Frank Mir won a preliminary bout over Roberto Traven by submission to an armbar at the 1:05 mark.


In other prelim fights, Evan Tanner beat Homer Moore with an armbar in Round 2; and Matt Lindland won a majority decision over Phil Baroni.
at May 29, 2017