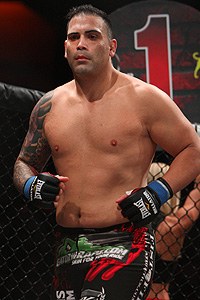 Ricco Rodriguez knocked off Randy “The Natural” Couture to win the UFC heavyweight title at UFC 39.

Rodriguez won his 11th fight in a row to capture the belt, which was vacated when previous champion Josh Barnett tested positive for steroids.

As the show’s name indicated, the heavyweight “warriors” battled into the fifth round.

Couture won the first two rounds, while Rodriguez controlled the third and fourth.


Rodriguez culminated his rally by pounding Couture into a verbal submission at the 3:04 mark of Round 5.

In the co-main event, future heavyweight champion Tim Sylvia won his UFC debut when Wesley Correia threw in the towel.

Gan McKee beat former headliner Pedro Rizzo when Rizzo’s corner stopped the fight after Round 1. Rizzo had taken a huge punch to the nose with 12 seconds left in the round.

Before the pay-per-view went on the air, Matt Lindland beat Ivan Salaverry by unanimous decision, and “The Muscle Shark” Sean Sherk beat Benji Radach when the doctor stopped the fight at the 4:16 mark.
at June 19, 2017