UFC 35: Down with the Sickness 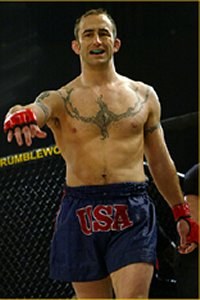 Fighting is hard enough when you’re healthy, but it’s a whole new challenge when you’re sick.

The flu bug bit the fighters and production staff hard at UFC 35, and the ailing Dave Menne lost his middleweight title to Murilo Bustamante.

The challenger landed a huge right to win by TKO at the 44-second mark of Round 2.

“Dave was so dehydrated from having the flu and vomiting and diarrhea that he was hallucinating during the fight,” Pat Miletich recalled in an interview with Sherdog.com.

“This was the toughest fight I’ve ever been in,” Pulver said.

Unfortunately, Pulver later vacated the title due to a contract dispute.

Ricco Rodriguez stayed hot in the heavyweight division, beating Jeff Monson by TKO in Round 3.

Chuck Liddell turned in a strong performance as he beat Amar Suloev of Russia by unanimous decision in a light heavyweight fight.

Andrei Semenov won the pay-per-view opener over Ricardo Almeida via TKO in Round 2.

In the other prelims, Gil Castillo beat Chris Brennan by unanimous decision; and Eugene "The Wolf" Jackson beat Keith Rockel with a guillotine choke in Round 2.
at June 05, 2017