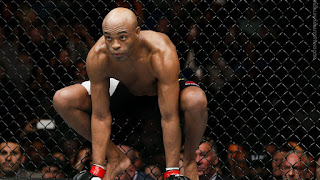 Unfortunately, Silva signed with PRIDE and wouldn’t arrive in UFC for another four years.

Instead, Hughes retained the welterweight title with a fourth-round TKO win over Hayato Sakurai.


Josh Barnett, 24,  became the youngest UFC champion ever when he beat Randy Couture for the heavyweight title by TKO late in Round 2.

However, Barnett was stripped of the belt after failing a post-fight steroid test.

In another heavyweight bout, Pedro Rizzo knocked out Andrei Arlovski with a head kick in Round 3.

Pat Miletich and Pete Williams competed in their final UFC fights, although neither man went out on a winning note.

Miletich lost to Matt Lindland by TKO at the 3:09 mark. Miletich, who was already training Hughes, went on to become a successful trainer and announcer.

Evan Tanner won the PPV opener over Elvis "The King of Rock & Rumble" Sinocic. The bout was stopped due to excessive cuts in just over two minutes.

Williams lost to Frank Mir by submission to a shoulder lock in 46 seconds in a preliminary bout.

In the other prelims, Matt Serra beat Kelly Dullanty with a triangle choke at the 2:58 mark, and Sean Sherk defeated Jutaro Nakao by unanimous decision.
at June 12, 2017