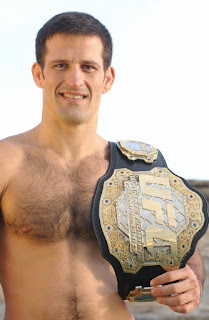 Usually, a tapout will end a fight, but Murilo Bustamante needed two submissions to retain his middleweight title at UFC 37.

Bustamante apparently forced Matt Lindland to tap out to an armbar, but Lindland claimed he did not tap out. Referee John McCarthy restarted the fight.

The champion cleared up the controversy by forcing Lindland to tap out to a guillotine choke in Round 3.

Bustamante was stripped of the middleweight title later in the year when he jumped to PRIDE Fighting Championships.


Ricco Rodriguez improved his UFC record to 4-0 with a win over Tsuyoshi Kohsaka. All four of Rodriguez’s wins came by TKO.

Caol Uno stayed in the lightweight title picture with a unanimous-decision victory over Yves Edwards.

In other PPV matches, BJ Penn defeated Paul Creighton by TKO in Round 2; and Phil Baroni beat Amar Suloev by TKO at the 2:55 mark.

In other prelim bout, Benji Radach needed only 27 seconds to beat Steve Berger by TKO. However, the result was later changed to a no-contest because the referee incorrectly stopped the fight.
at June 12, 2017