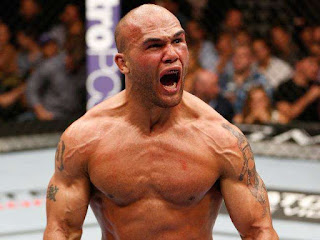 UFC has been a staple of pay-per-view TV since its inception, but it never had a fight on regular cable TV until UFC 37.5.

As its name would imply, this show was thrown together at the last minute, to gain UFC publicity on “The Best Damn Sports Show Period” on Fox Sports Net.

The best fight of the night would air on the show, and that honor went to welterweights Robby Lawler and “The Red Nose Pitbull” Steve Berger.

Lawler got the victory by TKO at the 27-second mark of Round 2.

Liddell won by unanimous decision to earn a shot at UFC light heavyweight champion Tito Ortiz. Belfort was returning to the UFC after a four-year absence.

Tony Fryklund returned to the Octagon after a five-year hiatus to beat Rodrigo Ruas by TKO in Round 2.

The other two fights were in the welterweight division, as Benji Radach beat Nick Serra by unanimous decision; and Pete Spratt defeated Zach Light with an armbar at the 2:25 mark.

Serra is the brother of Matt Serra, and Ruas is the nephew of “The King of the Streets” Marco Ruas.
at June 15, 2017