UFC 38: Panic on the Streets of London 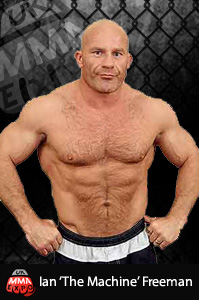 UFC invaded England for the first time at UFC 38, as Matt Hughes beat Carlos Newton to retain the welterweight title.

This was a rematch of the “Double Knockout” fight at UFC 34. This time, Hughes used a flurry of unanswered strikes to win by TKO in Round 4.

British star Ian "The Machine" Freeman scored a big win over undefeated Frank Mir. Referee John McCarty ruled that Mir had taken too much punishment at the 4:35 mark.

Genki Sudo, a veteran fighter from PRIDE and Rings, debuted in the Octagon and beat Leigh Remedios with a rear naked choke in Round 2.

The pay-per-view began with a battle of debuting light heavyweights, as Phillip Miller defeated James Zikic by unanimous decision.

Vladimir “The Janitor” Matyushenko was supposed to fight on this show, but he was hurt and Haseman took his place.

The best fight of the weekend may have taken place on the streets. Listen to Tito Ortiz and announcer Mike Goldberg talk about the incident here.
at June 19, 2017