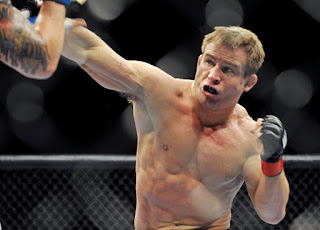 Sean Sherk carried a 20-0 record into UFC 42, but he couldn’t take the welterweight title away from Matt Hughes.


Wesley “Cabbage” Correia used a flurry of punches and knees to score a second-round TKO win over Sean Alvarez.

Pete Spratt scored the biggest win of his career over Robbie Lawler, who suffered a disclosed hip to stop the fight in the second round.

Future middleweight champion Rich Franklin made his Octagon debut with a TKO victory over Evan Tanner at the 2:40 mark.


Duane “Bang” Ludwig debuted in the lightweight division and beat Genki Sudo by unanimous decision before the PPV went on the air.

In the other prelim bouts, David Loiseau knocked out Mark Weir at the 3:55 mark; and Hermes Franca beat Rich Crunkilton by unanimous decision.
at June 22, 2017