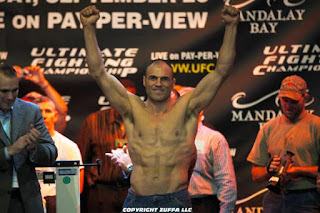 Randy Couture dominated Tito Ortiz to emerge as the undisputed king of the light heavyweights at UFC 44.

After winning the interim version of the title at UFC 43, Couture plowed through Ortiz with ease. He even spanked the outgoing champ in the closing moments of the fight.

At the age of 40, Couture had reached the top of the sport for the third time.


Tim Sylvia won the “Battle of the Giants” over Gan McGee to retain the heavyweight title.

The 6-foot-8 champion scored a TKO over the 6-foot-10 McGee in just under two minutes.

Unfortunately, Sylvia tested positive for steroids after the fight and was stripped of the championship.

Andrei Arlovski made a strong case for a shot at the heavyweight title.  He knocked out Vladimir “The Janitor” Matyushenko in just under two minutes.

In other pay-per-view bouts, Jorge Rivera beat David Loiseau by unanimous decision; and Rich Franklin used a flurry of punches and knees to beat Edwin Dewees by TKO at the 3:35 mark.

Nick Diaz made his UFC debut at age 20 in a preliminary bout. He beat Jeremy Jackson with a very quick armbar from the bottom in Round 3.

In the other prelim fights, Hermes Franca knocked out Caol Uno in Round 2; Karo Parisyan beat Dave Strasser by submission to a kimura at the 3:52 mark; and Josh “The Punk” Thomson debuted by knocking out Gerald Strebent at 2:45.
at June 26, 2017