UFC 46: Rise of The Prodigy and The Phenom 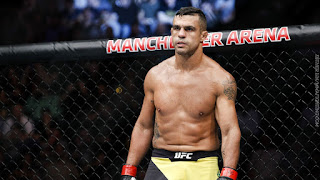 UFC crowned two new champions on the night before the Super Bowl at UFC 46.

Vitor “The Phenom” Belfort won the light heavyweight title from Randy Couture, ending an amazing run by the 40-year-old champion.

In the opening minute, Couture’s eyelid was cut by the seam of Belfort’s glove. The doctor stopped the fight at the 54-second mark, and Belfort was the new champion.

BJ Penn captured the UFC welterweight title from Matt Hughes, whose 13-fight win streak came to an end. Penn won with a rear naked choke at 4:37.

Penn had been unable to win the lightweight title on two occasions, but he ended Hughes’ quest for a record-breaking sixth title defense.


Frank Mir knocked out Wes Sims with a knee and a series of punches in Round 2. This was a rematch from UFC 43, where Sims was disqualified for a knee to a grounded opponent.