The Ultimate Fighter Season 1 Finale: The Fight That Changed Everything 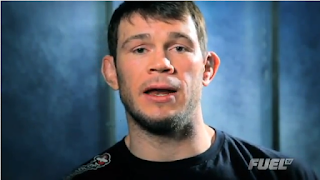 An electric battle of newcomers launched UFC into the mainstream of the sports world at The Ultimate Fighter Season 1 finale.

Forrest Griffin defeated Stephan Bonnar by unanimous decision in the best fight of the year, drawing millions of fans to the first live MMA show on cable TV.

Everything UFC achieved later – fights on Fox TV, coverage on ESPN, million-selling pay-per-views – can be traced directly to this fight.

The Ultimate Fighter was a reality show that ran on Spike TV for 14 seasons before moving to the Fox family of networks.

Chuck Liddell and Randy Couture were the coaches during Season 1, and they fought one week later on the UFC 52 pay-per-view.

TUF drew big numbers on Spike TV, retaining more than half of the viewers from WWE Monday Night Raw.

Bonnar was so impressive in defeat that he also earned a UFC contract from company president Dana White.

At the TUF 1 reunion three years later, White said,"It's amazing to think how close we came to not being here today. If it weren't for what these guys did, I don't know if there would even be a UFC. I'll never forget these guys. Ever.”

In the main event of the telecast, Rich Franklin defeated Ken Shamrock by TKO at the 2:42 mark.

Sanchez went on to challenge B.J. Penn for the UFC lightweight title at UFC 107. He also invented the “YES!” chant, which was popularized by Daniel Bryan in WWE.

Florian got three title shots (against Sean Sherk, B.J. Penn and Jose Aldo), but he was unsuccessful each time. Florian eventually moved on to become a UFC broadcaster.

Bobby Southworth lost by unanimous decision to Sam Hoger, but Southworth went on to become the first Strikeforce light heavyweight champion in 2006.

Josh Koscheck knocked out Chris Sanford at the 4:21 mark. Koscheck went on to challenge
Georges St. Pierre for the UFC welterweight title in 2010.

Nate Quarry beat Lodune Sincaid by TKO in 3:17. Quarry was fast-tracked to a middleweight title match later in the year. Sincaid won the WEC light heavyweight title in 2006.

In other bouts, Chris Leben defeated Jason Thacker by TKO in 1:35; Alex Karalexis by Josh Rafferty by TKO at the 1:40 mark; and Mike Swick knocked out Alex Schoenauer in 20 seconds.
at July 10, 2017