Ultimate Fight Night 1: Back to TV 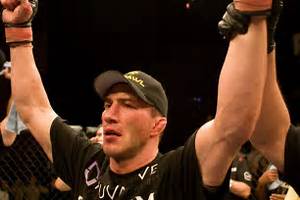 The Ultimate Fighter finale was such a huge success that UFC began airing “Ultimate Fight Night” shows on Spike TV later that summer.

Although Forrest Griffin and Diego Sanchez were the TUF winners, Nate Quarry became the first alumnus to earn a title shot.

Quarry beat Pete Sell by TKO in 42 seconds, although the fans protested that the fight was stopped too early. Quarry went on to challenge Rich Franklin for the middleweight belt at UFC 56.

Former King of Pancrase Nate Marquardt won a unanimous decision over Ivan Salaverry in the main event. However, Marquardt tested positive for a banned substance in his post-fight drug test.

Before the show went on the air, Drew Fickett beat Josh Neer with a rear naked choke in 95 seconds; and Kenny Florian beat Alex Karalexis when the doctor stopped the fight in Round 2.
at July 24, 2017