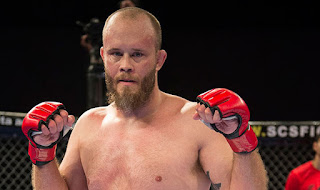 Chuck Liddell held onto the UFC light heavyweight title with a fourth-round TKO win over Jeremy Horn at UFC 54.

Horn returned to the UFC after racking up 31 wins during a four-year odyssey through Pride, WEC, IFC, King of the Cage and other smaller promotions.

The title fight ended when Liddell blasted Horn in the eye, and Horn told referee John McCarthy that he could not see.


In other bouts, Tim Sylvia kept himself in the heavyweight title picture by knocking out Tra Telligman with one second left in the first round.

Couture got back on track, defeating Mike Van Arsdale by submission to an anaconda choke in the third round.

Georges St-Pierre stayed strong in the welterweight division by defeating Frank Trigg with a rear naked choke in 4 minutes, 9 seconds.

Diego Sanchez, who won the middleweight division of The Ultimate Fighter, won his pay-per-view debut by punching Brian Gassaway into submission in the second round.

Before the PPV went on the air, James Irvin used a flying knee to knock out Terry Martin at the nine-second mark of Round 2.