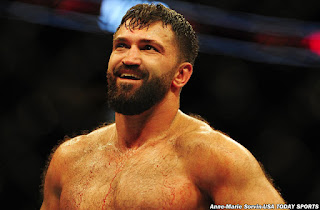 Andrei Arlovski only needed 15 seconds to retain the UFC heavyweight title at UFC 55.

The Belarus native plastered Paul Buentello with a right to the jaw, ending the main event almost as soon as it began.

Arlovski had been the interim champion, but was promoted to undisputed title holder due to Frank Mir’s injuries from a motorcycle accident.

Speaking of accidents, Ian “The Machine” Freeman missed the show due to a horse-riding mishap. He retired from the sport.

His scheduled opponent was TUF winner Forrest Griffin, who instead beat Elvis “The King of Rock & Rumble” Sinocic by TKO in 3½ minutes.


Chael Sonnen debuted in UFC with a submission loss to Renato “Babalu” Sobral in Round 2 via triangle choke. Sobral closer to a title bout with light heavyweight champ Chuck Liddell.

Former super heavyweight Joe Riggs earned a welterweight title shot with a TKO win over Chris Lytle in Round 2. Riggs challenged Matt Hughes for the belt one month later at UFC 56.

Due to all of the quick finishes, UFC aired two preliminary bouts on the pay-per-view.

Local star Jorge Rivera beat Dennis Hallman by unanimous decision; and Ron Faircloth vs. Alessio Sakara ended in a no-contest in Round 2 due to an accidental groin kick by Faircloth.

In the other preliminary fight, Marcio Cruz put away Keigo Kunihara with a rear naked choke in Round 2.
at August 31, 2017