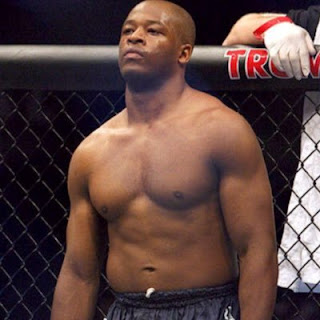 Who won? Well, there’s a reason why World Championship Wrestling no longer exists.

Raw blew out UFC in the ratings by presenting a three-hour reunion show, featuring the returns of Hulk Hogan, Steve Austin, Shawn Michaels and Mick Foley.

In the UFC main event, David “The Crow” Loiseau beat Evan Tanner on a second-round TKO due to severe cuts.

Loiseau scored his fifth win in a row and earned a middleweight title shot against Rich Franklin at UFC 58.

Chris Leben remained undefeated in the Octagon, forcing Edwin DeWees to tap out to an armbar at the 3:26 mark.


Brandon Vera made his UFC debut in the heavyweight division, using a series of knee strikes to score a second-round TKO win over Fabiano Scherner.

Vera then declared that he wanted to hold the heavyweight and light heavyweight titles at the same time. Aim high!

The Spike TV telecast opened with Drew Fickett defeating Josh Koscheck with a rear naked choke with 22 seconds left in the fight.

Preliminary results included Spencer Fisher over Thiago Alves with a triangle choke in Round 2; Jon Fitch over Brock Larson by unanimous decision; and Jonathan Goulet over Jay Hieron by doctor’s stoppage in Round 3.
at August 29, 2017