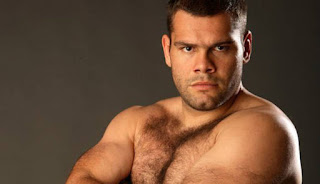 Nate “Rock” Quarry became the first alumnus of The Ultimate Fighter to receive a title shot at UFC 56.

Rich Franklin knocked Quarry out in 2:34 to retain the UFC middleweight title. Check out this devastating left.


Welterweight champion Matt Hughes made Joe “Diesel” Riggs tap out to a kimura at the 3:28 mark in a non-title bout.

Karo Parisyan was supposed to challenge Hughes for the title, but he was hurt in training. Riggs stepped in, but he lost his chance at the title by missing weight.

Gabriel Gonzaga won his UFC debut by landing a superman punch with 21 seconds left in the fight to knock out Kevin Jordan in a battle of heavyweights.

Georges St.-Pierre moved up in the welterweight ranks when he used a barrage of punches and elbows to beat Sean “The Muscle Shark” Sherk by TKO in Round 2.

Two preliminary fights aired on the PPV. Sam Hoger beat “The Karate Kid” Jeff Newton with a rear naked choke in Round 2; and Thiago Alves beat Ansar Chalangov by TKO in 2:25.

The other prelim bout saw Nick Thompson win a unanimous decision over Keith Wisniewski.
at September 18, 2017