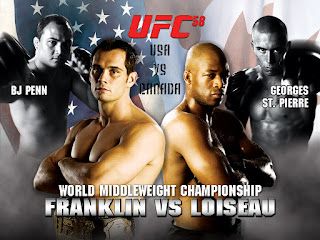 UFC middleweight champion Rich Franklin cruised to a lopsided win over David “The Crow” Loiseau in the main event of UFC 58.

Not only did Franklin retain his title, he secured a 5-3 win over America in the “USA vs. Canada” themed pay-per-view.

Even more impressive, Franklin broke his left hand and his left foot in the second round and still won the five-round bout.

Loiseau had earned the title shot with consecutive TKO victories over Gideon Ray, Charles McCarthy and Evan Tanner in 2005.

George St. Pierre tied the score for Canada at 3-3 by winning a split decision over B.J. Penn.
GSP’s win earned him another title shot against Matt Hughes at UFC 63, but Penn ended up getting the shot due an injury to GSP.


Mike “Hands of Stone” Swick then moved the USA ahead by defeating Steve Vigneault with a guillotine choke.

In other pay-per-view fights, Nate Marquardt scored one for America with a unanimous decision over Joe Doerksen; and Canada’s Mark Hominick used a triangle armbar to beat “The Master of Thug-Jitsu” Yves Edwards in Round 2.

During the prelims, the lightweight division returned for the first time since 2004. Canadian Sam Stout won a split decision over Spencer Fisher.

In other preliminary bouts, Tom Murphy of the USA beat Icho Larenas by TKO in Round 3, and Jason Lambert used a kimura to submit TUF 2 alumnus Rob MacDonald in 1:54.