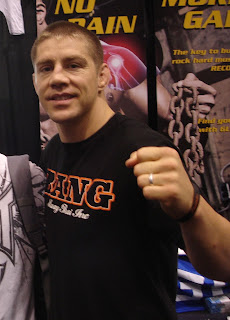 In a preliminary fight, Ludwig only needed one punch to beat Jonathan “The Road Warrior” Goulet in 11 seconds.

Tim Sylvia earned another shot at the UFC heavyweight title by scoring a unanimous decision win over Assuerio Silva. This set up a bout with champion Andrei Arlovski at UFC 59.

TUF 1 runnerup Stephan Bonnar used a kimura to submit James Irvin in four and a half minutes.

Chris Leben, another TUF 1 alumnus, opened the Spike TV telecast with a TKO win over Jorge Rivera at the 1:44 mark.

Jason Von Flue used his signature “Von Flue Choke” to score a technical submission over Alex Karalexis in Round 3 of a preliminary fight.

Other prelim results included Josh Neer over Melvin Guillard with a triangle choke at 4:20; and Spencer Fisher over Aaron Riley when the doctor stopped the fight after the first round due to Riley’s broken jaw.
at September 25, 2017