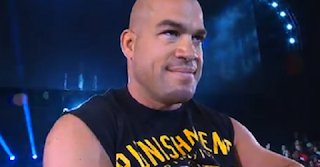 Ken Shamrock got a third chance to beat Tito Ortiz, but he came up short again.

The two TUF 3 coaches had battled just three months earlier at UFC 61, with Shamrock winning on a first-round TKO.

However, the fight ended in controversy over whether Herb Dean stopped fight too early.

Unfortunately for Shamrock, his third meeting with Ortiz ended on another first-round TKO. Shamrock retired after the fight, but he came back less than two years later.

Ortiz won the first battle at UFC 40, so he won all three fights in the rivalry. The “Final Chapter” fight drew a huge 4.3 rating on Spike TV.


Kendall Grove, who won TUF 3 middleweight tournament under the coaching of Ortiz, submitted Chris Price after a series of elbows in just under four minutes.

Seven-year veteran Jason MacDonald made his UFC debut by upsetting TUF 3 finalist Ed Herman with a triangle choke at the 2:43 mark.

“I’m nobody’s stepping stone,” MacDonald said. “It took me a long time to get here, but I’m here to stay.”

In the Spike TV opener, Matt Hamill scored a unanimous decision over Seth “The Silverback” Petruzelli.

Nate Marquardt improved to 3-0 in the UFC by defeating Crafton Wallace with a rear naked choke in 74 seconds.

In other preliminary fights: