UFC Fight Night 7: One for the Corps 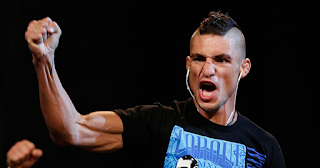 UFC put on a show for the Marines, and Diego Sanchez remained undefeated at UFC Fight Night 7.

Sanchez knocked out Joe “Diesel” Riggs with a knee strike and punches to improve his record to 17-0.

U.S. Marines made up almost the entire crowd, and an auction raised money for military families.


ll of the main-card fights were welterweight bouts, and the first three resulted in unanimous decisions.

Josh Koscheck improved to 8-1 with a win over the debuting Jeff Joslin. Karo Parisyan bounced back from a loss to Sanchez by defeating Drew Fickett.

Before the Spike TV broadcast, Alan Belcher knocked out Jorge Santiago with a head kick.

Luigi Fioravanti, a retired Marine, scored the biggest win of his career by defeating former UFC middleweight champion Dave Menne at the 4:44 mark.