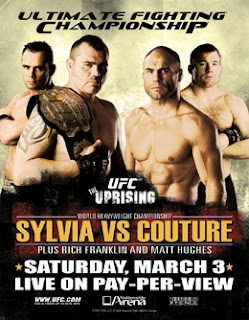 The pay-per-view took place as part of the annual Arnold Sports Festival.

Randy “The Natural” Couture returned from a year off to win the UFC heavyweight title from Tim Sylvia by unanimous decision.

Martin Kampmann used an arm triangle to beat Drew McFedries by submission at the 4:06 mark.

In the PPV opener, Jason Lambert knocked out Renato “Babalu” Sobral in the second round.
TUF 3 alumnus Matt “The Hammer” Hamill beat Rex Holman by TKO in four minutes on the pre-show.


Other preliminary results included Jon Fitch over Luigi Fiorvanti by submission to a rear naked choke in Round 2; Gleison Tibau won a unanimous decision over Jason Dent; and Jamie Varner beat Jason Gilliam in 94 seconds with a rear naked choke.
at December 05, 2017