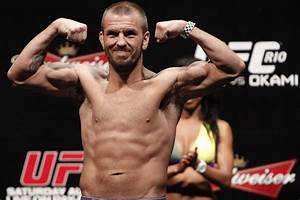 Spencer “The King” Fisher avenged a loss to Sam Stout in the lightweight main event of UFC Fight Night 10.

This was a rematch from UFC 58, at which Stout won a split decision that turned out to be the 2006 Fight of the Year.
The fighters picked up the action where they left off, busting each other open with punches in the first round.  Fisher finally wore down Stout to capture a unanimous decision.

Lightweights also competed in the co-main event, as Thiago Tavares improved his record to 12-0 with a win over  Jason Black with triangle choke in Round 2.

Jon Fitch won his 14th fight in a row by defeating Roan Carneiro with a rear naked choke in Round 2.

Drew McFedries knocked out Jordan Radev in 33 seconds in the Spike TV opener.

Anthony “Rumble” Johnson made his UFC debut on the preshow. He improved his overall record to 4-0 by knocking out Chad Reiner in 13 seconds.