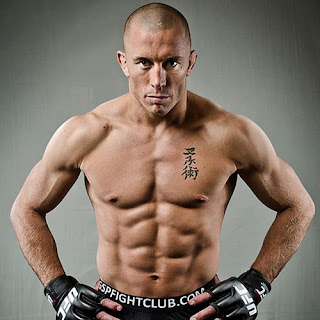 GSP won the interim welterweight title when Matt Hughes verbally submitted to an armbar with six seconds left in Round 2.

Hughes had been scheduled to challenge Matt Serra for the welterweight title in the TUF 6 coaches’ fight. However, Serra dropped out due to injury.

GSP’s win put him in a position to recapture the title he lost to Serra in a huge upset at UFC 69.

Chuck Liddell won a unanimous decision over Wanderlei Silva in the main event, which was billed as “a battle years in the making.” Silva’s status as one of PRIDE’s top stars made this bout a dream match.

In a heavyweight battle, Eddie Sanchez beat Soa “The Hulk” Palelei by TKO in Round 3.


Lyoto Machida improved to 12-0, as he beat debuting PRIDE star Rameau “The African Assassin” Thierry Sokoudjou with an arm triangle choke in Round 2.

Rich Clementi kicked off the pay-per-view with a win over “The Young Assassin” Melvin Guillard, who submitted to a rear naked choke at the 4:40 mark.