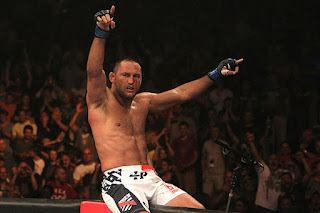 Silva used a rear naked choke to win the fight late in Round 2.

Yushin Okami knocked out Evan Tanner with a knee strike in Round 2. Chris Leben beat Alessio Sakara by TKO at the 3:16 mark.

In the pay-per-view opener, Jon Fitch improved to 9-0 in the UFC with a unanimous decision over Chris “The Professor” Wilson.

Poor Andrei Arlovski, a former UFC heavyweight champion, was relegated to the pre-show. He beat Jake O’Brien by TKO in Round 2.

Josh Koscheck used a head kick a flurry of punches to beat Dustin Hazelett by TKO in Round 2.

Diego Sanchez, who invented the “YES!” chant, made David Bielkheden of Sweden tap out to strikes late in the first round.