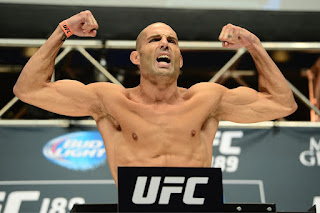 Mike Swick debuted in the welterweight division by narrowly defeating Josh Burkman in the main event of UFC Fight Night 12.

Swick improved to 11-2 with a majority decision victory in the battle of The Ultimate Fighter alumni. Two judges scored the fight 29-28 for Swick, while the other called it 29-29.

In the middleweight co-main event, Patrick “The Predator” Cote beat Drew McFedries by TKO at the 1:44 mark. Cote’s third straight win moved him closer to a title shot against Anderson Silva.


The other fights took place in the lightweight division. Thiago Tavares scored a unanimous decision over Michihiro Omigawa.

Nate Diaz opened the Spike TV broadcast by forcing Alvin Robertson to submit to a triangle choke at the 3:39 mark.

Jeremy Stephens used a flurry of punches and elbows to earn a TKO win over Cole Miller in Round 2 in a preliminary bout.

Kurt Pellegrino scored a second-round TKO over Alberto Crane, despite the fact that Crane kicked his tooth through his lip earlier in the fight.