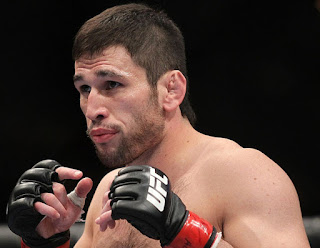 Amir Sadollah had to beat CJ Dolloway twice in order to win the middleweight tournament in The Ultimate Fighter Season 7.

Sadollah defeated Dolloway in the semifinals on the TV show, but his opponent, Jesse Taylor went on a rampage in Las Vegas and was removed from the final match.

Dolloway defeated Tim Credeur to earn a spot in the finals, but Sadollah used an armbar to force Dolloway to submit at the 3:02 mark.

Rampage Jackson and Forrest Griffin were the coaches for TUF 7, and they battled for Jackson’s light heavyweight title in the main event of UFC 86 two weeks later.


In the main event of the TUF 7 finale, Kendall Grove beat former middleweight champion Evan Tanner by split decision. Two judges scored the fight 30-26 for Grove, but the other thought Tanner won 29-28.

Matthew Riddle won the Spike TV opener by unanimous decision over Dante Rivera in a battle of TUF 7 contestants. Riddle later went into pro wrestlers, headlining many independent cards as “The King of Bros.”

On the pre-show, Dustin Hazelett beat “The People’s Warrior” Josh Burkman with an armbar in Round 2.

Drew McFedries steamrolled Martin Eastman by TKO in 68 seconds.  “The Immortal” Matt Brown beat Matt Arroyo by TKO in Round 2.

In other preliminary fights, Dean Lister defeated Jeremy Horn, and Rob Kimmons beat Rob Yundt. Both fights ended with a guillotine choke in just less than four minutes.
at April 16, 2018