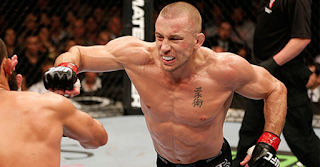 GSP avenged his loss to Matt Serra at UFC 69 one year earlier, using a series of knees to the body to win by TKO late in the second round.

UFC made its Canadian debut, as a record crowd of 21,390 cheered their hometown boy on to victory.

In the co-main event, Rich Franklin beat Travis “The Serial Killer” Lutter by TKO in Round 2.


Nate Quarry beat Kalib Starnes by unanimous decision in a battle of The Ultimate Fighter alumni. Starnes avoided contact with Quarry during the fight, causing the UFC to cut him after the fight.

Michael Bisping bounced back from the first loss of his career with a win over Charles McCarthy. The fight was stopped after one round due to McCarthy’s arm injury.

In the pay-per-view opener, Mac Danzig used a rear-naked choke to beat Mark Bocek in Round 3. Danzig, the winner of TUF 6, improved his record to 18-4-1.

Cain Velasquez made his UFC debut on the pre-show, defeating Brad Morris by TKO in 2:10.

Jason Day beat Alan Belcher by TKO in the first round of a preliminary fight. Jason “The Athlete” MacDonald defeated Joe Doerksen by TKO in Round 2.