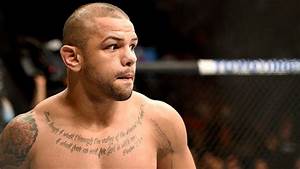 Alves and Hughes battled at a 174-pound catchweight, stepping in after the original main event of Chuck Liddell vs. Mauricio “Shogun” Rua fell apart due to injuries to both fighters.

Despite a sprained ankle, Alves nailed Hughes with a flying knee and followed up with strikes to earn a TKO win in Round 2.

Michael Bisping improved his record to 16-1 with a win over Jason “Dooms” Day by TKO at the 3:42 mark.

Nate Marquardt was docked two points due to illegal strikes, leading to his loss in a split decision to Thales Leites.

On the pre-show, Martin "The Hitman" Kampmann beat Jorge Rivera with a guillotine choke at the 2:44 mark. Matt Wiman knocked out Thiago Tavares in Round 2.

Kevin “The Fire” Burns made a successful Octagon debut, beating Roan Carneiro with a triangle choke in the second round.

In other preliminary fights, Luis Cane beat Jason Lambert by TKO at the 2:07 mark; and Paul Taylor won a split decision over Jess "The Joker" Liaudin of France.
at April 14, 2018