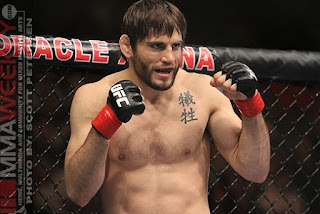 Brock Lesnar scored his first win in the Octagon with a unanimous decision over Heath Herring. Despite his inexperience, Lesnar got a shot at the UFC heavyweight title three months later.


In other pay-per-view fights, Rob Emerson knocked out Manny Gamburyan in 12 seconds; and Demian Maia beat Jason “The Athlete” MacDonald with a rear naked choke in Round 3.

Jon “Bones” Jones made his UFC debut with a unanimous decision over Andre Gusmao on the pre-show.

Cheick Kongo scored a TKO over Dan Evenson in a heavyweight fight with five seconds left before the end of Round 1.