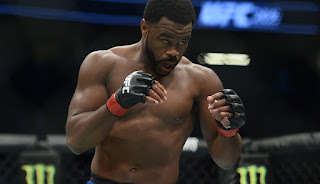 Evans clobbered the former light heavyweight champion with an overhand right in Round 2.

Witness the brutality for yourself.

"I wanted to beat him at his own game," Evans said.

He improved his record to 12-0-1 and earned a light heavyweight title shot against Forrest Griffin at UFC 92.

Former middleweight champion Rich Franklin returned to the light heavyweight division to defeat Matt Hamill. Franklin used a body kick to score a TKO in Round 3.

Dan Henderson rebounded from the loss of his two PRIDE championships with a unanimous decision over Rousimar Palhares.


Nate Marquardt pounded his way to a TKO victory over Denmark's Marvin "The Hitman" Kampmann in 88 seconds.

Jason “The Athlete” MacDonald bounced back from a loss one month earlier to beat Jason Lambert with a rear naked choke in Round 2.