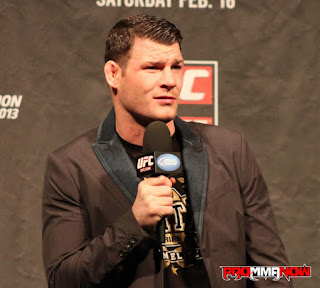 Michael Bisping improved his record to a sparkling 17-1 by defeating Chris Leben at UFC 89.

TUF 3 winner Bisping established himself as a British fighting headliner and as a contender for Anderson Silva’s middleweight title.

The event aired live in the United Kingdom and on tape delay in North America on Spike TV.

In the co-main event, “The Dean of Mean” Keith Jardine rebounded from a loss to Wanderlei Silva with a split decision over Brandon Vera.
Chris Lytle beat Paul Taylor by unanimous decision; and Luiz Cane defeated Rameau Thierry Sokoudjou by TKO in Round 2.

“The Irish Hand Grenade” Marcus Davis kicked off the show by beating Paul Kelly with a guillotine choke in Round 2.

On the pre-show, Shane Carwin improved to 10-0 as heavyweight, beating Neil Wain by TKO in 91 seconds.

Dan “The Outlaw” Hardy (20-6) debuted in the UFC with a split decision win over Akihiro Gono.

In the other pre-show bouts, which were all in the lightweight division: