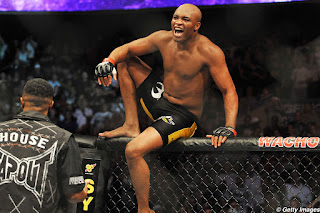 Silva knocked out “The Sandman” in 61 seconds to improve his UFC record to 7-0.

UFC presented this show up against the first Affliction pay-per-view, which featured Fedor Emelianenko beating Tim Sylvia in 36 seconds in the main event.

Brandon “The Truth” Vera went down a weight class, debuting in the light heavyweight division with a unanimous decision win over UFC newcomer Reece Andy.


Frankie Edgar (10-1) continued his march toward a shot at the UFC lightweight title with a unanimous decision over Hermes Franca.

Kevin Burns beat Anthony “Rumble” Johnson in a fight with a strange ending. Burns poked Johnson in the eye illegally, but he won the fight by TKO when Johnson could not continue.

In the televised opener, CB Dollaway used a Peruvian necktie to beat Jesse Taylor in just under four minutes.

On the pre-show, Rory Markham knocked out Brodie Farber with a head kick in 97 seconds. Spike TV made sure to put that fight on the main show.

In a battle of TUF 7 contestants, Tim Credeur beat Cale Yarbrough by TKO at the 1:54 mark.

Other preliminary results included Nate Loughran over "The Hater Hurter" Johnny Rees in 4:21 with a triangle choke; Shannon Gugerty over Dale Hartt with a rear naked choke in 3:33; and Brad Blackburn beat James Giboo by TKO in Round 2.