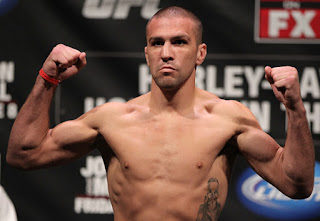 Still, it was the fifth win in as many UFC fights for Diaz, a former WEC lightweight champion.

Neer is nicknamed "The Dentist" for his "tendency to re-arrange his opponents' teeth," according to the UFC Encyclopedia.

Spike TV presented the fight card as a lead-in to the eighth season of The Ultimate Fighter, featuring teams coached by Frank Mir and Antonio Rodrigo Nogueira.


In the co-main event, Clay “The Carpenter” Guida defeated TUF 6 winner Mac Danzig by unanimous decision in another lightweight bout.

In the Spike TV opener, Eric Schafer beat Houston Alexander by submission to an arm-triangle choke with seven seconds left in Round 1.

Alessio Sakara walloped Joe Vedepo with a head kick to score a knockout win at the 1:27 mark. Wilson Gouveia used an armbar to beat Ryan Jensen by submission in Round 2.

Mike “The Master of Disaster” Massenzio made a successful UFC debut, beating Drew McFedries by submission to a kimura in 1:28;

In other preliminary fights: