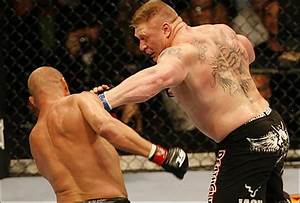 Brock Lesnar captured the UFC heavyweight title in only his third Octagon appearance at UFC 91.

The former WWE champion beat Randy “The Natural” Couture by TKO in the second round to complete a stunning transition from the top of the wrestling world to the pinnacle of MMA.

The 265-pound Lesnar had a 45-pound advantage on the 45-year-old Couture. More than 1 million fans bought the show on PPV.

In the co-main event, Kenny Florian beat Joe “Daddy” Stevenson with a rear-naked choke at the 4:03 mark. Florian earned a lightweight title shot against B.J. Penn at UFC 101.


Dustin Hazelett forced Tamdan McCrory to submit to an armbar in just under four minutes.

In the heavyweight division, Gabriel Gonzaga beat the debuting Josh “Heavy” Hendricks by TKO in 61 seconds.

Demian Maia improved his record to 10-0, beating Nate Quarry by submission to a rear-naked choke.

Since the pay-per-view matches were so short, all four of the preliminary fights aired on the PPV.

Aaron Riley scored a unanimous decision over Jorge Gurgel. Mark Bocek beat Alvin Robertson with a rear-naked choke in Round 3.

“The Immortal” Matt Brown beat Ryan “The Tank Engine” Thomas with an armbar in the second round.
at May 08, 2018